We fell in love with this handmade antique Santero figure of the Madonna and Child. She has a sweet face and a beautiful costume of velvet over carved wood. The baby is a cute blonde Jesus with curly hair and blue eyes. He is the early version of that blonde Jesus in all those paintings!

While we were in Puerto Rico we found a fine antique shop and went in. The American expats had owned this shop since the nineties and had a beautiful selection of art and antiques. We had been to a museum and had seen a display of Santera figures including the one above, and I wanted to buy a Santera if I could. Santeras are old religious icons made by the indigenous people of Puerto Rico after the arrival of the Spanish. The Catholics wanted the natives to become Christian and insisted that the figures be Christian. The natives pretended to give in, but instead they crafted figures that bore a resemblance to their own deities. Then, when they used these figures in their religious practices they were making both themselves and the Spanish happy.

The figure we bought is a Madonna and Child carved from wood. She is wearing a velvet robe and has some kind of natural hair. The child is also wood and is wearing cotton clothing. The paint is slightly chipped, but otherwise the condition is excellent. The dealer told us that the figure dates from about 1860.More information on Santos Figures

Lonely? Add this fun-loving pair of figures to your home to keep you company.
$38.00 Read more 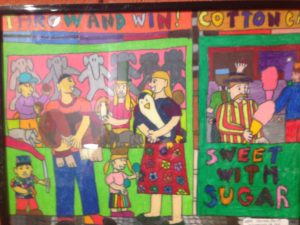 This original drawing by Sarah Britt of Morganton is titled Winning at the Carnival. It is one of several unique, colorful works by Sarah that I bought in Morganton at the art center where she works. This one is framed and 9X12.
$65.00 Add to cart

TOTE BAG MADE FROM VINTAGE SUZANIS

Fabulous, colorful bags to carry everything from laptops to library books.
$75.00 Add to cart